Critics and film buffs across India term the past few years as the new Indian New Wave, a kind of resurgence of Indian cinema. A novelty that one probably never saw apart from the parallel cinema movement of the 50’s and 60’s, a few NFDC gimmicks dispersed throughout the last century and masterpieces by the great Indian filmmakers who are not limited by classifications – Ray and Ghatak in Bengali cinema, Adoor in Malayalam cinema and Mani Kaul and Kumar Shahani with their revolutionary ideas in Hindi cinema. It would be very unfair not to mention names like Chetan Anand, Guru Dutt, Bimal Roy and Mrinal Sen in this context. But all these movements, experiments and geniuses were then. Now is the age for commercial blockbusters and market savvy films. In this environment of mass consumption and commoditized cinema, when people say that Indian cinema is seeing a creative spurt, then filmmakers must be creating something that is worth a keen look.

I think this reinvention started with Mani Ratnam, a Tamil, Telegu, Kannad and Malayalam filmmaker who was as poetic in his screenplay on paper, as he was on shot direction with a camera. Some of his films not only garnered critical acclaim but were huge commercial successes as well. This might be one of the primary inspirations for other filmmakers to be bold and venture into the long forgotten territory of conscious cinema that also makes some dough. Mani’s Nayagan is one of my favourite films and the credit must be shared with Kamal Haasan the actor. His venture into Hindi cinema with the dubbed Roja and Bombay still have the ability to give you goose bumps with their beautiful, almost picture perfect frames and hardcore-to-the-point-of-disturbing subjects. This terror trail was bracketed at the end by Dil Se, a Hindi film that was so stylishly European that it was a huge dud at the Indian box office (but a hit overseas). And in any case, it is hard to make a hit out of a love story destined to end tragically from the very first shots of the film.

The stylization was also evident in the amazing cinematography and lighting used by the duo of Mani Ratnam and Santosh Sivan. The dilemma of staying put or walking away was a constant throughout the movie and never better established than through the following scene of a radio studio where the door constantly shuts and opens, leaving the actors in an uncertain light.

These films were followed by one of the most exciting Indian film in recent years. I am talking about the ingenious direction of Ram Gopal Verma (exec producer of Dil Se), to a maverick screenplay by Anurag Kashyap, for a seminal film that Mumbai loves, Satya. The underworld had always been in a love tango with Indian cinema. Despite having a primarily Bomaby-centric focus, films across most Indian languages did not shy away from these goons. The style, overbearing persona and the rise and fall storyline was always a hit with the crowds and formed a plot base for many Indian films. But Satya was different. RGV was so assured and knew what he wanted from every frame. The scene where Bhiku proclaims himself the king of Bombay is so ironically structured against the vastness of the sea with the high rises in the background, and a small Bhiku standing like a spec of dirt on this beautiful landscape. Ominous.

The joke will be on him!

Satya also had a protagonist who was not stylish at all. Kashyap must have been in a fix while presenting his script because his hero (villain) was so human. In fact this representation of a pathetic hero is still a prominent feature in all of Kashyap’s films. 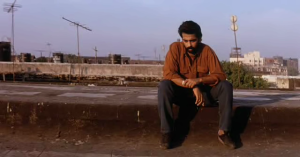 This brings us to the prince of the new Indian cinema, Anurag Kashyap. His struggles to reach where he is today (in Cannes, to be precise) have already become legends in screen writers’ and directors’ folklore. The defiant young man who got inspired by The Bicycle Thieves has made several films, written numerous ones and been a producer to many new talents. With two banned films, many box office flops, one hit and a 5+ hour long opus to be released soon, Kashyap seems to have been juggling around with a lot ideas and creative outbursts. Being a little more international in his approach to cinema as a business, he is giving TED talks and attending various festivals across the globe. The idea is novel, and Indian cinema needs to be exposed to the foreign lands, but what about the Indian audiences? Taking films abroad is different than bringing films to India. A new wave is not only about going to Cannes. It is as much about appreciating one’s own Cannes.

Khosla Ka Ghosla. Oye Lucky Lucky Oye. Love Sex Aur Dokha. If you have seen these films then you know the genius the man behind them is. Dibakar is a true artist when it comes to film making. His style is not permanent and his idea of cinema comes from life itself. The characters in his films are unique, real and funny. Even in LSD, the element of funny was never let go off. West Delhi is his playground and he has proven that with the perfect OLLO. Watching it in a theatre was strangely exhilarating for me. As the three roles of Paresh Rawal unfolded, the film started making sense. It was not just a story of a petty robber making it big; it was a personal journey of a young man searching for his father. Dibakar makes certain that each character has a part to play, and no one is a mere spectator. It is almost Chekovian. His next is Shanghai, an adaptation of the novel Z. It will be a great film.

In all this talk of the new kind of cinema that India is seeing, there has to be a mention of a certain screenplay writer who has shown the potential that Indian cinema can tap from classic resources which have been done to death in the first world. Vishal Bhardwaj has adapted two of Shakespeare’s plays for screen, and both the films are mouth watering to say the least. While Maqbool was dark and minimal, Omkara was loud and gory. The bard would have been proud.

Being an Indian native, I am really sorry not to have mentioned some of the Tamil and Marathi cinema that has also contributed a great deal towards this cinema explosion off late. I have seen the reputed and National award winning stuff coming out of regional centres but I cannot boast of being in the know about these cinemas. Films like Shwaas, Harishchandrachi Factory and Deool are good films that need to be seen by India. When film buffs have to wait for a film to be recognized by a national award before knowing its name, then there is definitely something limiting about this new wave of Indian cinema. But, I hope, like all art movements, this one will spread and reach every region of the country. Time is not a constraint. It can happen tomorrow or two decades down the line. What is important is to strive for a complete, unlimited Indian cinema.

One thought on “Indian cinema is celebrating its 100 years.”